Well, that got your attention, didn't it? And I am not kidding when I tell you I am going to GIVE you a recipe for a fart that IS 400 plus years old! Let me tell you, though, about what is the most inconceivable and odd "mistake" that has been kept as such, regardless of the connotation.
The reason for this post to begin with is because I celebrated my birthday yesterday and there was ONLY one thing I wanted, being a simple Yankee. While most of you will cling to a classy meal as something that stands out above the rest or you simply like to 'brag' about your Pan Seared Goose Foie Gras with a Balsamic Reduction on Crisp Citrus Watercress......what brings me to a culinarily fulfillment is enjoying a meal that my father or grandparents made every Saturday night. Not only was it satisfying in every sense, but to this day, it stands out above any meal I have ever had. Last night I had Baked Beans(from a recipe of my fathers), brown bread, cole slaw, potato salad, a slab of grilled, REAL, ham(for those of you who may think it a Swamp Yankee and beneath you, then you can say pan seared)and true Indian Pudding. So need I say more as to the intent of this post now?

On November 7, 1480, Martin Rodkyns received an order from the ship Sanctus Spiritus, owned by John Stephyns. There was sugar, honey, wood and cork.

And Marin received...4000 farts of Portugal.

Thinking this may have been a type by the author of this cookbook, I began my research. Nope! It truly was called a Fart!

In a cookbook printed in England called A book of cookrye. Very necessary for all such as delight therin, 1591, there is a receipt(recipe)for Farts of Portingale:

"Take a quart of life Honey and set it upon the fire and when it seetheth scum it clean, and then put in a certaine of fine Biskets well serced, and some pouder of Cloves, some Ginger, and powder of sinamon, Annis seeds and some Sugar, and let all these be well stirred upon the fire, til it be as thicke as you thinke needfull, and for the paste for them take Flower as finelye dressed as may be, and a good peece of sweet Butter, and woorke all these same well togither, and not knead it."

Three years later, another English cookbook called Good Husewife's Handmaide for the Kitchin, 1594, there is a recipe called Farts of Portingale.

"Take a peece of a leg of Mutton, mince it smal and seasopn it with cloues, mace pepper and salt, and dates minced with currans: then roll it into round rolles, and so into little balles, and so boyle them in a little beefe broth and so serue them foorth."

But I will say that in all likeliness, the word Fart started out as a typo somewhere along the lines and, although crude, the name stuck.

Today, sadly(I think), there is only one fart that anyone makes anymore and they are Nuns Farts. Yup, these Canadian original, cinnamon-like pastries are actually called Pet de Soeur, translated as sisters(Nuns) Fart. One day I will make them because they are simply a flaky pie crust cut into long strips, coiled as you would a cinnamon roll and baked. Once out of the oven,you drizzle a mixture of melted butter, brown sugar and cinnamon.

Here is a GREAT recipe from my friends at https://www.recettes.qc.ca/recettes/recette/pets-de-soeur 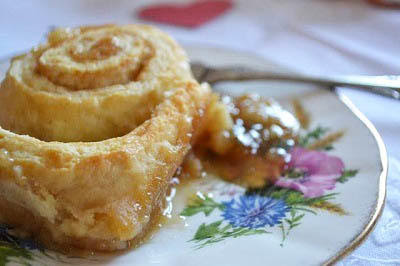 Its funny to read about so many Canadian Food Historians trying to find out why these are called farts. One saying because a Nun farted in a kitchen when they were making them one day, making the other Nun laugh so hard she accidentally dropped her rolled up pie crust in hot oil. Of course this is foolish not only because of the question why was she rolling pie crust to begin with, but we have the original recipe for Farts, which is a dough.

Heck, even Mozart lamented on Farts when he wrote to his mother in Mannheim:


"Madame Mutter!
I like to eat Butter.
We are, Thank the Lord,
Healthy and never bored.
Our trip is bright and sunny.
Though we haven't any money;
We enjoy the company we keep,
We are not sick, we do not weep.
Of course, the people I see
Have much in their bellies, just like me,
But they will let it out with a whine,
either before or after they dine.
There's a lot of farting during the night..."

....wait! Wrong kind of Fart..sorry about that!

To end this post, I DID make a fart, and here it is. Was simple a meatball simmered in beef broth. So go ahead and make you favorite meatball and simmer it in broth until if floats. Cover it with gravy or demi-glace as I did and have at it. 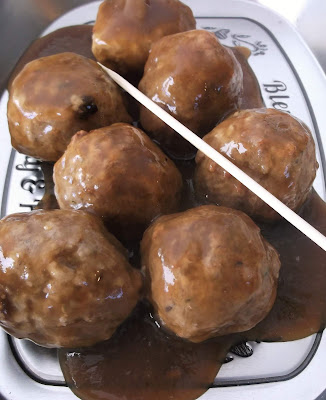 Posted by The Yankee Chef at 11:40 AM No comments: