I remember as a child here in Maine that two of my favorite wild foods to eat were those little garnet-colored chokecherries and crabapples. 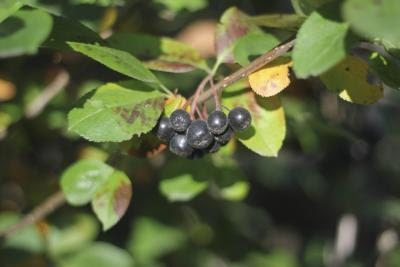 It seems as though they grew everywhere and whenever we were outdoors playing, no matter where we were, we didn't have to look far to eat either of them. Heck, the natives as well as our forefathers and mothers used chokecherries from everything from pemmican(a dried concoction often eaten on long trips) to stews. Tea was even made from the bark and leaves of chokecherries, even though modern historians and scientists have proclaimed the leaves to be toxic.

Chokecherries are said to be inedible by many people who write recipes or "informative" stories about them, so it is obvious they have never TRIED them before writing their words of wisdom. Certainly they are quite tart, sour, astringent and mouth-puckering, but wasn't that the whole fun of eating them as a child?  I never know of any friend of mine growing up that ever got sick from them. 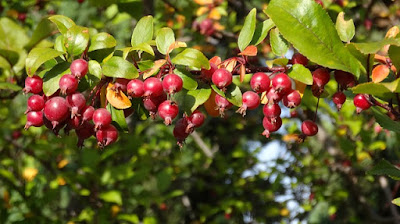 Crabapples are another one of those childhood favorites, much like the man-made Sour Patch gummy candies or the sour tasting Warheads of todays generation. 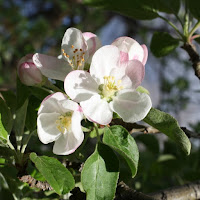 The genesis of our cultivated apple, the flower of crabapple trees are an everlasting tribute to my childhood memories and a graceful addition to many landscapes, both in the wild and at home with their twisted branches and wild look, along with their tolerance to severe New England conditions.
You will find many recipes using both chokecherries and crabapples but one thing to bear in mind. When using either, especially crabapples, always make sure you use apple cider or juice with them, or you will have one dish that will dry your mouth out worse than alum. And make sure you peel and cut the apples directly into the recipe. Crabapples oxidize(brown) faster than........(you fell in the rest).

I know. I know, crabapples are hard to find now-a-days, but I urge those of you who are able to find them, to use them here. They add a special touch that no other apple can employ. But if all else fails, find the tartest apples you can find, such as Granny Smiths, Suncrisps, Staymans, Gravensteins and Winesaps. 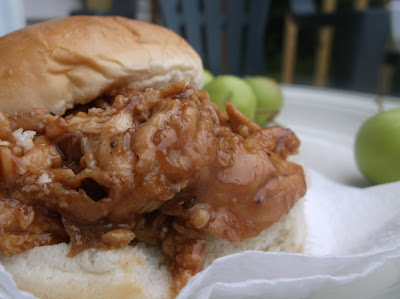 Whisk together first 6 ingredients and add to a crockpot along with the pork and onion. Cover and let simmer on low for 4-6 hours, or until falling apart tender. When there is an hour left, add apples. Remove pork and onions with a slotted spoon into a large bowl and shred with a fork. The apples will have reduced to little bits so leave them in liquid. Transfer this liquid from crockpot to a saucepan and bring to a boil over medium-high heat. Stir in tomato paste and continue boiling for a minute or two, or until everything is well combined and sauce has thickened slightly. Add shredded pork and onions back into sauce, mix thoroughly and scoop out to mound on prepared rolls. Serve with additional sauce if there is any.

* Or use 2 large, tart apples that have been peeled, cored, and diced.

Note: Make this recipe by braising as well, which lends a crispier texture. Simply whisk the first 6 ingredients together and pour over the pork that has been set in a high-sided pan, with a rack underneath to prevent scorching on bottom. Spread the apples and onions over the pork, cover with foil and braise 2 1/2 to 3 hours, or until very tender. Remove pork and onions, shredding pork as directed and mixing them with the pan juices. Omit the tomato paste or transfer pan juices to saucepan, whisk in the paste and bring to a boil before mixing with pork and onions.

Posted by The Yankee Chef at 11:31 AM No comments:

To Scream or Not to Scream


I must give major kudos to TVTeddy at Twitter (https://twitter.com/TVTEDDY/status/623197472245067776/photo/1) for opeing this discussion about a deplorable situation that simply didn't need to happen. Thanks for opeing up this level-headed dialogue, regardless of some of the responses I have read, again thank you Teddy  .

I have been asked repeatedly to weigh in on the viral story of Darla Neugebauer, owner of Marcy's Diner on Oak Street, Portland, Maine who was heard screaming at a 21 month old child.

I'm not going to mince words here because I feel trying to 'cave-in' to one side or the other, or both, makes my comments mute. In a nutshell, for those of you who are unaware of this story, we have a couple from New York, Tara Carson, her husband and child, go into Marcy's Diner for breakfast. The food they order is completely and utterly irrelevant to the story and will not be repeated here, although Darla uses it as an excuse for her tyrant of obscenities. Tara's wait time for her food is highly relevant however. 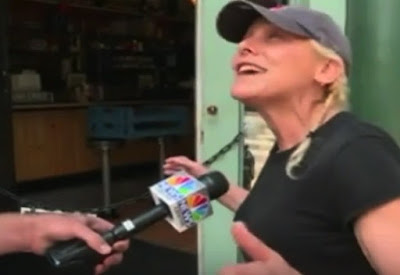 During the 40-45 minute wait time for their food, their child was becoming increasingly rambunctious and even may have been irritable, as all parents are keenly aware. The child may have even started becoming disruptive, although there has not been one statement from existing customers that this was the case.

Apparently the owner herself felt the need to belittle, demean and scream obscenities at both the parents AND the child AND came over to their table, throwing down take-out containers with a few less than nice comments about Tara and her family leaving the restaurant. This can be seen at http://www.thedailymeal.com/news/eat/maine-restaurant-owner-screams-child-prompting-outrage-restaurant-owner-screams-child-horrifies/072115


I will put blame on the parents on one point, NONE on the child and the rest on the obvious(from my perspective) issues of Darla.

Tara Carson. (Photo Credit: KVUE)
If the child was, indeed, to the point of being disruptive, then the parents certainly should have realized such and taken the first step to remove themselves so that others could enjoy their culinary repose.

Now having said that, I am 'biting at the bit' to say something about the owner. I have been in many public venues where newborns, toddlers and children have been disruptive, and the first thing that I remember and tell myself is that a child is just a child. As long as the parents realize that their child is either disruptive or may become so and are acting appropriately with others in mind, then the issue is resolved. If they are not, then it is incumbent upon me to remove MYSELF from the "site of distress".

The owner felt as though, apparently, her other customers would never come back if she didn't control the situation her own way. Really? That is insane!!! I will go out of my way to never visit that diner and can safely assume others feel the same way. Now which option is common sense?

For all of you who agree that the Carla's comments and tantrum were just and appropriate, I am at a complete loss of words. That is only one step below the morality scale on how she actually handled this.

Here is the link to each party's response.

It would have been far more appropriate for Carla to have cooled down a bit, sent another employee over and brought one of the parents aside to explain that their child was causing a disturbance(if the baby actually was)and to please try to rectify it. While the staff could have done more to help the family out by possibly satiating the child(if needed)with some crackers or something or cooking the meal ahead of others but chose not to, they aggravated the situation. And don't tell me that could not have been done. I have done that hundreds of times in my career, as my father and grandfather have since 1918. It is a matter or WANTING to.

Certainly is isn't incumbent upon the staff to help, but it sure would have been a decent thing to do. But as sad as it is nowadays, people would rather allow drama in their lives than to try and prevent it.

Bottom line. We cannot, nor should we even try, to legislate morality. There will always be that one sour apple in the bunch and we need to learn to live with it. Although the owners actions were unforeseeable and inexcusable, it would have been wise to remove yourself from a situation that is easily inflated, especially in todays "me me me" world.

But what supersedes that thought is the entirely demeaning way in which the owner tried to solve the problem. As mentioned, the parents could have been dealt with on the side or in a much more dignified manner to begin with, ONLY if there was a true issue.

It looks as though the owner has either an anger issue or something emotional is off kilter because anyone who swears or screams at a child, any child, knows that a child cannot defend him or herself. So in their mind, they won the fight. They feel so ill of themselves that they take it out on others and try to bring others to their level or attempt to make themselves look better in the eyes of those around them. Hmmm........I am sure psychologists and psychiatrists have a word for that.

Certainly there is nothing illegal about this episode and we should not try to bring anything into this that doesn't belong. It is purely and simply a moral issue and a life lesson. There will always be idiots among us.

Now if I have missed something here, than certainly I will alter my opinion because parents should act as such and not make their child out to be any more special than anyone else. As more comes out, than I will change my opinion but I still think there are other ways of dealing with this than hollering out obscenities at a child, IF she indeed did do that.

One of the first lessons we learn as a cook, or even a restaurant owner, is how to deal with patrons, regardless of the issue. Cooks, especially, need to keep their psych on an even keel, not act in a demeanor that is perceived as psychotic. If you had a child that was screamed at in the manner you did, how would you feel? Would you sit back and take it?

Show your employees restraint and compassion. It is a shame we even need to teach this, but because some bosses choose NOT to set a precedent to their staff, we need to. Shameful.