Ayuh, that gawnicus 'et all the cling john.....

Ahhhhh, the nuance of Maine lingo. And it begins with AYUH.

I have been reading, lately, about the origins of the Maine word AYUH and listening to people from around the country and in various media(including movies) how they pronounce it. I have YET to find someone who doesn't sound extremely foolish trying to mimic our affirmative reply. They often strongly emphasize the A and draw it out wayyyy too long, followed by almost shouting the YUH part comically. But they leave out the most essential part of the word, the nasally twang with its distinctive drawl! 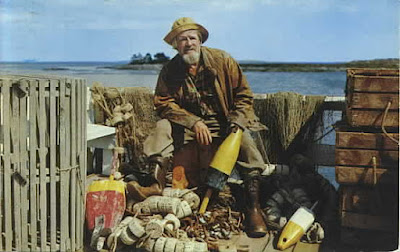 Does this Maine Fisherman look like he wants to talk?

You simply cannot say it properly without these elements, and one sounds like a foreigner when you try. Now this is not to say you cannot correctly pronounce it, but you truly have to be a Yankee, a down east Maine Yankee to be precise, to make it sound correct.

Although there have been many historians and linguistic experts who have come close to giving the origin of this word, they really haven't quite nailed it down. And this is because, again, it is too simple for anyone to figure out. My Dad always told me that there are often riddles in life whose answers are too simple to understand. Many people often delve deeply into meanings and backgrounds in order to try and solve this dilemmas, when the true answer takes no such route, and AYUH is one of them.

This word began with the simple YUH, of course with the nasally twang and drawl. Most of the time during the pre-19th century in Maine, the AYUH was phonetically devoid of the long A but as time progressed, and Maine became more settled with "outsiders", many paid to much attention to that beginning(almost silent) A and began adding it to YUH.

Over time, and into the 1800s, this A was added to YUH and it became widespread, with(again) way too much accent put on it. If you want to properly say it, simply draw out the Y, while allowing just a little air escaping through your nose at the same time and finish with the UH. It should sound like you are tired of repeating yourself and you sound frustrated, which brings us to the origination of the word.

Let me give you one experiment that almost solves the origin question as simply as I can.

You are sitting down working on something and are fully focused on your task at hand,(Which us Mainah's are known for and have been for generations). You don't want to be disturbed or you are obstinate and don't like to be disturbed by someone with frivolous banter. (Which is the true nature of a true Yankee).

People are coming up to you disturbing your work with either monotonous questions or meaningless chatter. You are on edge and simply don't want to be disturbed. You answer 'yes' to anything you are being asked. You would automatically answer YES by drawing out the Y because of you are irritated and hinting to the questioner that the answer is obviously YES.

This is exactly how the AYUH became part of our Maine vocabulary. We drew out the Y, and when doing so, it sounds as if you have added a long A at the beginning. It's Just That Simple!

So forget about the stories about cold churches, weather, meetinghouses and the widespread catarrh that affected many New England communities of old. These played absolutely no role in our AYUH. Sure, catarrh resulted in a build up of mucus in the nasal cavities of anyone afflicted by it in young America, and often sounded as if you had a twang when speaking. But everyone suffered from catarrh long ago, but the nasally AYUH is ONLY heard in Maine and nowhere else, even though catarrh hit other communities far greater than down east Maine.

How bout some other Maine and Yankee terms that are long forgotten, but interesting in their own right?

Hawkins whetstone-Rum. In "honor" of a certain Hawkins who was once a temperance lecturer.

Keeler tub-A place in which dishes where washed.

Last of pea time-to be hard up and poor.

Malahak-To quickly and roughly chop something.

Moonglade-The term for the beautiful and color image a moonbeam reflects on still water.

To make a Virginia fence-To walk as though drunk

Hot as a red wagon-Extremely drunk

He can't spin a thread-Powerless to act

To be one of the White hens' chickens-A very agreeable and nice person.

Comfort powders-Little slips of folded paper with brief scriptures written on them.

Twizzles-Other types of fish that you weren't fishing for that got caught up in a fisherman's net.

And lastly, here are a list of old time apples found in many New England ledgers, diaries and histories since the Puritan era. See if any of these ring a bell. 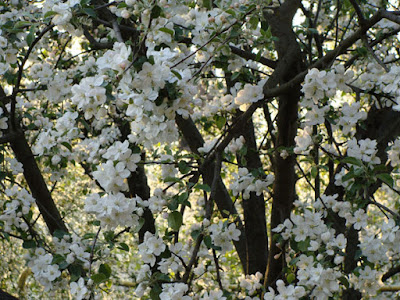