I Am As Angry As I Could Be!

And that doesn't come lightly. I very seldom get upset or angry because I know stress kills. But as most of you can relate, when it comes to your kids, ESPECIALLY minor children, there is a very low bar one has to cross in order to make us angry.

As most of you know, I get irritated when I teach all of my children to be polite and understand that you are not entitled to anything but need to earn respect and be very thankful for anything anyone does for you. Adults teach their children this throughout their lives and should lead the way by example, every day of their lives actually.

My children are no exception, especially my youngest. He is 8 years of age and his name is Thomas. Many of you have seen him on the front cover of one of my books, but fewer know that I teach him manners and respect. I receive compliments all the time because he ALWAYS say please, thank you and you are welcome.  But I notice fewer and fewer people who tend the registers at stores, gas stations, supermarkets or any retailer understand just what a simple thank you means. It isn't lowering yourself by saying it, it shows the customer that you appreciate the business. There have been studies galore that extol the virtues of a simple, free and quick  thank you to those who pay your salary or keep your business....well, IN business!

Now every time my son and I go somewhere and we don't get a "thank you" in return, we stand there and say "You're welcome!". And you would NOT believe how many times that person just looks at us as if in a daze because they have NO IDEA what to say in return. Holy Cow! Talk about the dumbing down of society!!!

Now to the heart of this post. There are 2 stores here in my neighborhood. Bratt's in Stetson and Ollie's right up the road(I am not sure if they are in Stetson or the next town over).

Let start with Ollie's Market. Both my son and I abhor going there now and only do so in extreme emergencies. The reason? Because you would not believe how many times we have been in there and have not received a simple "Thank You". I brought it to the owners attention one day and he apologized and told me he would "have a talk with everyone". I was courteous(as I am ALL the time when complaining) and went on my way. Well, every single time that I have been back since then , NOT ONE SINGLE THANK YOU!!!. So both Thomas and I stopped going there. Heck, every time we drive past it, my son says "Dad, don't even look at that place!"

But yesterday was the exception. I was almost out of gas and had ice cream in the van that was quickly melting. Even though Thomas really REALLY hated to stop, I pulled up to the pump and before exiting the van, I asked Thomas to take a 10 dollar bill into the store and tell the lady that "My Dad is pumping $10 of gas."

Now you need to understand that this is the kind of store that you pull up, lift the nozzle from the gas pump, wait for them to turn it on and then you can start pumping. Afterward, you walk in and pay.

This time, I started pumping gas and at the same time, my 8 year old walked into an empty store and gave the lady the money and told her what I had explained to him to say. After a couple dollars had been pumped, I noticed that Thomas wasn't coming back out. So I stopped pumping and began walking to the store. It was at that time Thomas swung open the door and looked like he was about to cry. I said "What's wrong?". He answered "They told me they couldn't put the money in the register until you were done pumping."

According to Thomas, that's ALL the lady told him!!!!

He thought he had to STAY in the store until everything was done. Now from the outset, this doesn't look like a big deal, but let me tell you if you could have seen the scared look on his face, you would have thought differently. That lady DID NOT HAVE TO TELL THOMAS THAT...PERIOD! It is not his concern WHEN they are to put the cash in the drawer! All they had to do was tell him "Thank you!". It instantly made me think they were keeping him in the store to make sure I didn't pump too much.

That lady could also have told Thomas(after seeing him just standing there)that he was okay to leave the store and go back to his Dad, but noooo.

Anyway,. I very loudly, and the door was still open, told Thomas "They don't need you to be in the store while I am pumping Thomas." He said "But they said they couldn't put the money in the register." That's when I hollered, "They can figure it out!" And I know the lady saw the very upset look I had on my face as well as what I said. But still, not a peep from her to show Thomas he didn't have to stay in the store.

AFTER ALL, IF THEY WERE CONCERNED THAT I WAS GOING TO PUMP TOO MUCH GAS, THEY COULD HAVE EASILY EITHER SET THE AMOUNT OR STOPPED THE PUMP.

Anyway, we finished up, got in the van and I turned to ask Thomas, "Did they at least say thank you?"

Can you guess what his answer was? You would be right. NO!!!!

This is the one time that I wanted to march right back in and say something. But I just didn't have the time. But I showed restraint in front of my son but all you Moms and Dads know how hard it was NOT to march right into that store. THAT was the very last time I will ever patronize Ollie's Market again. They just don't get it!

And by the way, this is the same place where an employee or manager once told me that CUSTOMERS should say thank you because Ollie's provides a service to the area. My jaw is STILL dropped and I am utterly at wits end and speechless at such an unappreciative argument.

Because I was long winded in this post, I will tell you the extraordinary issue I had with Bratt's Store in Stetson. You think this episode was crazy! It pales in comparison to what I experienced with the owner of Bratt's. 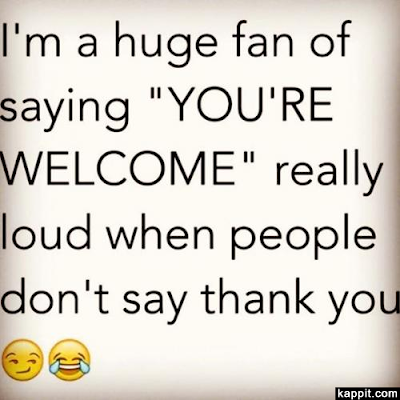