.....but I LOVE this stuff. To read the centuries old cookbooks and way of the lives of our ancestors could keep me occupied for hours on end. One of my favorite cookbooks is, of course, a Yankee cookbook dated 1772 called The Frugal Housewife. But this isn't even the oldest cookbook I have. Enjoy these excerpts for some ancient cookbooks in my library, verbatim, misspellings and all. 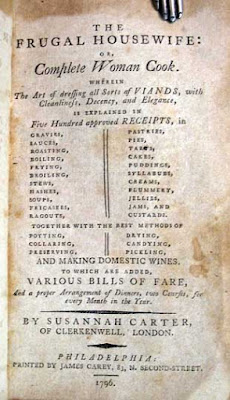 To Make Lumber Pie: Take a pound and a half fillet of veal, mince it with the same quantity of beef suet, season it with sweet spice, five pippins, a handful of spinach and a hard lettuce, thyme and parsley, Mix with it a penny loaf grated and the yolks of two or three eggs, sack and orange-flower water, sweet spice, a pound and a half currents and preserves, and a caudle.
The Frugal Housewife, 1772. 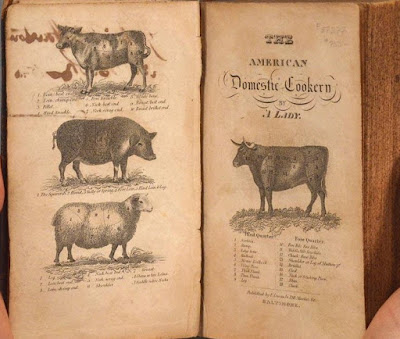 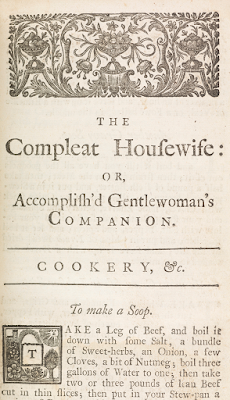 
To Preserve Eggs: May be preserved by anointing them with lard or any greasy or oily substance for months, and some say years. The oily substance closed the pores, hinder the access of air, and thus prevents putrefaction. they should be anointed soon after they are laid.
The Husbandman and Housewife, 1820. 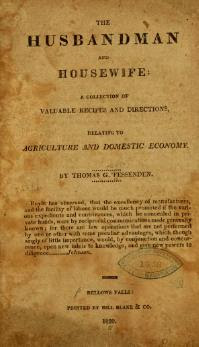 
To Stuff a Turkey: Grate a wheat loaf, one quarter of a pound butter, one quarter of a pound salt pork, finely chopped, two eggs, a little sweet marjorum, summer savory, parsley, pepper and salt(If the pork be not sufficiently) fill the bird and sew it up. The same will answer for all wild fowl. Water fowls require onions. The same ingredients stuff a leg of veal, fresh pork, or a loin of veal.
The New American Cookery, 1805.


To Make Chouder: Take a bass weighing four pounds, boil half an hour; take six slices raw salt pork, fry them till the lard is nearly extracted; one dozen crackers soaked in cold water five minutes. Put the bass into the lard, also the pieces of pork and crackers, cover close, and fry for twenty minutes; serve with potatoes, pickles, apple sauce or mangoes. Garnish with green parsley.
The New American Cookery, 1805.


To Make Hot Crab: Pick the meat out of a crab, clear the shell from the head, then put in the former, with a very small bit of nutmeg, salt, [pepper, a bit of butter,crumbs of bread, and three spoonfuls of vinegar, into the shell again, and set it before the fire. You may brown it with a salamander. Dry toast should be served to eat it upon.
A New System of Domestic Cookery, 1807.


To Boil Cod sounds: Soak them in warm water half an hour, then scrape and clean, and if to be dressed white, boil them in milk and water. When tender, serve them in a napkin, with egg sauce. The salt mush not be much soaked out, unless for fricassee.

To Make Eel Broth: Very nourishing for the sick. Stew two hours and add an onion and [peppercorns; salt to taste.
The American Domestic Cookery, 1822.


To Make Lobster Salad: Make a salad; and put some of the red part of the lobster to it, cut. this forms a pretty contrast to the white and green of the vegetables. Don't put much oil, as shell-fish absorb the sharpness of vinegar. Swerve in a dish, not a bowl.
The American Domestic Cookery, 1822.


To Fry Muscles: Put them into a kettle, in which there is as much boiling water was will cover them. Being enough, take them up and beard them, then wash them in warm water, wipe them dry and flour them. Being fried crisp, dish them up with butter beaten with the juice of lemon and parsley throwed over them, fried crisp and green.
The Family Dictionary, 1705. 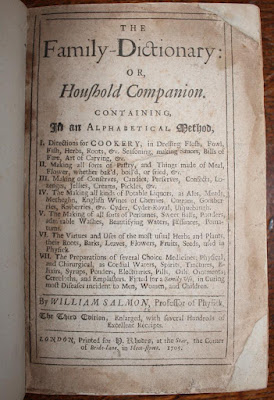 To Make Oyster Pie: Parboil a quart of large oysters in their own liquor, mince them small, and pound them in a mortar, with pistachio nuts, marrow and sweet herbs, and onion and savory seeds, and a little grated bread; or season as aforesaid whole. Lay on butter and close it.
The Frugal Housewife, 1772.


To Pickle Oysters: Take a quart of oysters, and wash them in their own liquor very well, till all the grittiness is out. Put them in a sauce pan or stew pan and strain the liquor over them . Set them on the fire, and scum them; then put in three of four blades of mace, a spoonful of whole pepper-corns, when you think they are boiled enough, throw in a glass of white wine. Let them have a thorough scald; then take them up and when they are cold, put them in a pot and pour the liquor over them, and keep them for use, Take them out with a spoon.
The Compleat Housewife, 1730.


To Make Shrimp Sauce: Wash half a pint of shrimps very clean. Mince and put them in stew pan, with a spoonful of anchovey liquor and a pound of thick melted butter; boil it up for five minutes and squeeze in half a lemon. Toss it up and put it in a sauce boat.
The Virginia Housewife, 1825. 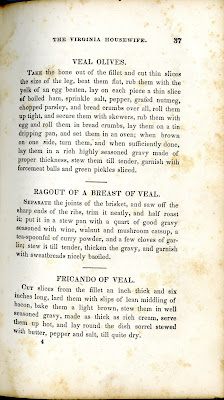